The FinTech Awards Luxembourg Grand Final, hosted on 21 June at KPMG’s headquarters (39 JFK) in Kirchberg, honoured Governance.io, Scaled Risk and Neurodecision with top awards. Ten startups competed for three different awards, following the semi-final round in May. In his introduction to the event, Luxembourg Prime Minister Xavier Bettel emphasized the importance of the competition and of FinTech in Luxembourg. 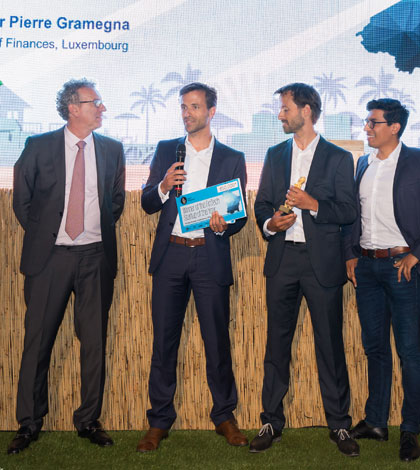 , hosted on 21 June at KPMG’s headquarters (39 JFK) in Kirchberg, honoured Governance.io, Scaled Risk and Neurodecision with top awards. Ten startups competed for three different awards, following the semi-final round in May. In his introduction to the event, Luxembourg Prime Minister Xavier Bettel emphasized the importance of the competition and of FinTech in Luxembourg.

FinTech is obvious for Luxembourg: add the long experience and a strong expertise in finance with a lot of investment in infrastructure. It’s also a big part in the digital economy, now and for the future. But it’s important to create a real culture of entrepreneurship and understand that fail it’s important to learn : give the people the right to risk themselves.

“It’s clear that Luxembourg is on the map as a digital hub – it is agile enough to see change happen quickly. As a government, we can continue to create an environment that encourages innovation, we can foster the creation of an ecosystem, we can help create a culture – but we need the entrepreneurs themselves,” Prime Minister said.

80 startups around the world applied to the Fintech awards. The 10 finalists were:

During the awards final, each company was given 6 minutes to pitch to a panel of jury members, which was followed by a 4 minute question-and-answer session. Luxembourg Finance Minister Pierre Gramegna announced the winners:

For the winner 2Gears : 50 000€ and 3 month hosting in Technoport. The solution Governance io allowing industry players funds to improve the governance of managed entities. For its co-founder, Bert Boerman, players FinTech area and large financial institutions instead must achieve better collaborate for the good of everyone (Read the complete interview in french).

“I had the pleasure of seeing five of the presentations today, and am impressed by the candidates’ energy and commitment,” said Finance Minister Pierre Gramegna. “It shows that Luxembourg is recognized as a major FinTech hub in the European Union. What makes Luxembourg interesting for FinTech start-ups is that we have a critical mass, with 143 banks, hundreds of service providers, and the second largest investment fund centre in the world.”

“One winner but a lot of good ideas”

This was the first iteration of the Luxembourg FinTech Awards, which helps to reinforce Luxembourg’s reputation for attracting entrepreneurs and startup talent. The event also highlighted the close partnership between prominent players and entrepreneurs, venture capitalists, government and financial industry representatives serving on the jury panel for the competition.

“Innovation is inscribed in KPMG’s DNA, as we continue to help prepare our clients to meet the challenges and opportunities of the digital era,” said Georges Bock, Managing Partner of KPMG Luxembourg. “Thus we are very proud to be amongst the founding members of this national initiative. We are thankful for the opportunity to have hosted this year’s awards at KPMG Luxembourg.”

About the Fintech Awards Luxembourg

Developed between Digital Lëtzebuerg, the ICT Cluster, KPMG Luxembourg, LuxInnovation, Maison Moderne, and the Technoport, these national awards aim to bring the best of technology to Europe’s leading financial centre.