Some news from CIONET Luxembourg

CIONET Luxembourg hold its second Advisory Board 2015 yesterday October 13th. The occasion to get the status 2015 up to date and some news from the Single Interest Group (SIG). 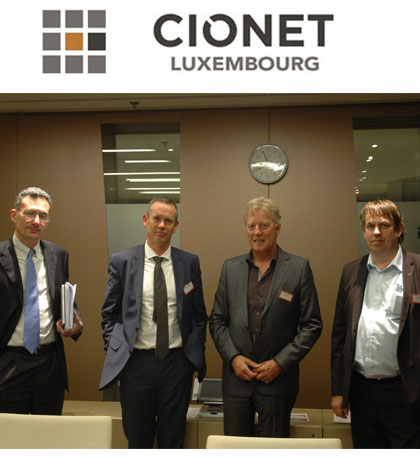 CIONET Luxembourg hold its second Advisory Board 2015 yesterday October 13th. The occasion to get the status 2015 up to date and some news from the Single Interest Group (SIG).

Following the decision taken end 2014 CIONET Luxembourg the Advisory Board decided to push the idea to have the CIO community working on 4 SIG’s (Single interest Group) themes:

e-skills: The most urgent and important topic

e-Skills is the most urgent and important for the industry in Luxembourg. Our first event in March 31 was around e-Skills and the Grand Coalition a project from the European Community. This was presented to Prime Minister Xavier Bettel by Frits Bussemaker CIONET NL along with an exemple of what could be called a disruptive innovative model run by AXA with Banque Soon.
*Presentations are available on request.
Following this first initiative we invited Robert Madelin (Director of DG Connect EC) during the Golden-i in June 4th to talk about the Single digital market program. This in presence of Xavier Bettel.
Early June we launched also a e-Skills survey which will serve as a base to the final conclusions of the group end of 2015.
Actually we plan to participate in the e-Skills conference on Dec 15 given by Xavier Bettel and Andrus Ansip (Vice president of the EC).

Agility & Flexibility: Are we mature?

Definition of Agility & Flexibility was key to start elaborating a plan in this domain. Finally the group decided to mesure the degree of maturity of our companies in different sectors of activities in luxembourg.
Two survey’s will be issued soon: one towards the SSII working with Agile solutions and the other towards our CIO community.
The conclusion will be communicated end of 2015 or start 2016 depending our CIO’s availabilities.

FinTech: We need to talk more about Tech

CIONET participate during the first part of 2015 in the action of Luxembourg for Finance with Nicolas Mackel. We took the opportunity to integer in the Golden-i program a view on FinTech driven by Matteo Rizzi from Italie. Some exemples in Luxembourg and abroad where taken in exemple.
The group will finalize the discussions by issuing a set of recommendations focused on the technological aspects that fit in the Luxembourgish conception of of the FinTech industry.
Value of IT: will start before end of October

Projects in the pipe: