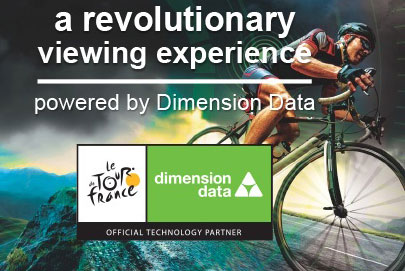 Dimension Data, the global ICT organisation processing the data from telemetry sensors under the saddles of the Tour de France riders’ bikes, said it had processed  100.7 million records up to the end of stage 16: in the first nine stages of the Tour, 59.70 million records were processed.

Dimension Data released a summary of the data it has processed for the 16 stages of the Tour, which were completed on Sunday. With 83% of the race completed, some of the highlights of the 16 stages include:

This year Dimension Data and Amaury Sport Organisation (A.S.O.) introduced the tracking of weather conditions. The wind on Mont Ventoux (stage 12) raged at 140 km/h, which caused the race organisers to move the finish line and shorten the stage distance by 6 km. This climb is also the toughest, based on gradient, elevation and weather conditions.Thomas DeGendt (LTS), clocked an average climbing speed of 14.8 km/h, while the lowest recorded climbing speed on Mont Ventoux was 12.72 km/h.

Dimension Data’s mobile data centre and office has travelled 3,858.5 km since the race began on 2 July. The 39 tonne truck accommodates the 22-strong on-the-ground technical, social and support team. And to follow the race, there are 10 screens in the truck, which takes two hours to set up and take down every day after each race is completed.

Watch the video to see what it takes to operate as part of a global team in an office that moves every day.

The rise of social commerce is transforming online shopping but isn’t without problems.
However, open banking could be a key.