The past nine days of the Tour de France have delivered intense racing and many dramatic ups and downs to thrill the fans. Here’s what it all looked like in data. 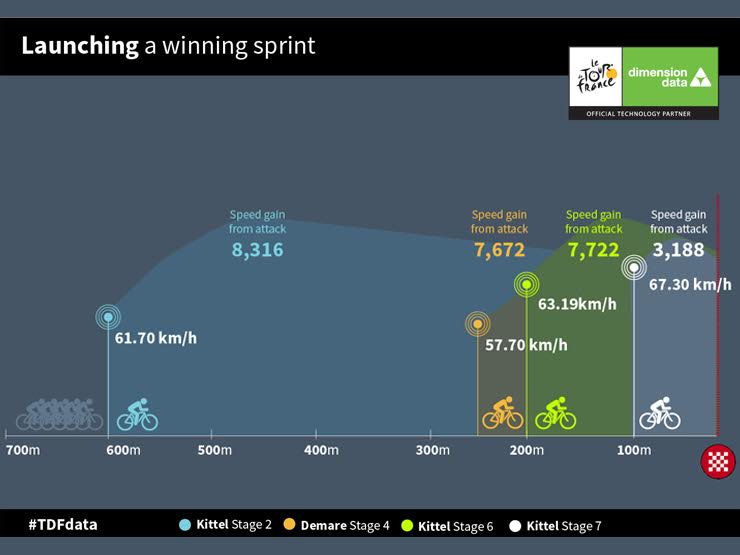 The past nine days of the Tour de France have delivered intense racing and many dramatic ups and downs to thrill the fans. Here’s what it all looked like in data.

This year’s peloton has already covered 1,596.5 km of the route, offering more than enough dramatic action for us to reflect on. From the crash-marred opening time trial to a brutal stage 9 climb in the mountains… here are the data insights Dimension Data has gathered.

How to launch a winning sprint on Tour de France?

Just ask Marcel Kittel (QST). The German powerhouse dominated three of the four bunch gallops in the first week. It was by no means a smooth ride for Kittel, though, who found himself out of contention for a win on stage 4 owing to crashes along the way. But his luck was in on stage 7: he won by a fractional 6 millimetres! Kittel’s master skills are worth admiring: he hasn’t enjoyed a perfect lead-out from his team yet, nor was he necessarily the fastest rider. But he always seems to find the best way around his rivals, and strikes at just the right moment.

Stage 1 could only have been explosive, with the tantalising prospect of wearing the first Yellow Jersey of the 2017 Tour at the end of a 14-km individual time trial. This got many riders excited… perhaps a little too much so. In the rain, a few took unnecessary chances on the slippery roads. Eight riders crashed and three had to drop out of the race due to injuries they sustained on the opening day. Among them, Alejandro Valverde (MOV) hit the highest speed recorded that day: 64.6km/h, right before he went down. As one of the favourites of the race, he sadly covered only 0.2% of the 3,540km route.

Attacking on the flat, a futile pursuit?

Flat-as-a-pancake stages through the French countryside are bound to end in a brutal bunch gallop. But if you know you can’t win a sprint (and you’re keen on some TV airtime), you may as well give it a go and break away early. There’s a chance, albeit miniscule this early in the Tour, that you might just cross the line by yourself. However, the first week proved this tactic to be futile when sprinter teams were still hungry for the chase. And, boy, were they ever! Guillaume Van Keirsbulck (WGG) is the only rider who managed to build a serious lead over the peloton: up to 13’42” on stage 4. But even he couldn’t muster the horsepower to successfully escape the pack in the end.

Some days are tougher than others

Sunday was no day for chilling in the peloton. On the eve of the first rest day, all riders tackled the most demanding stage of this Tour so far: 181.5km, featuring seven climbs adding to total elevation of 4,600m. Stage winner Rigoberto Uran (CDT) covered the distance at an average speed of 35.43km/h, much slower than any other day, despite the battle raging all day long. The challenge proved too tough for some: no less than seven riders, including French champion and previous stage winner Arnaud Démare (FDJ), didn’t make the cut-off (39’58” after Uran) and were eliminated from the Tour.

With so much already going down at the world’s greatest cycling race this year, we’re sure to be kept on the edge of our seats as the rest of the action unfolds.

Stage 1 – A difference in speed of 0.27km/h over 14km was enough to grant Geraint Thomas (SKY) the first Yellow Jersey of the 2017 Tour, ahead of Stefan Küng (BMC).

Stage 2 – The breakaway covered 99.3% of the stage at the front of the race before being overtaken by the sprinters in the final kilometre.

Stage 3 – French champion Arnaud Démare (FDJ) reached a top speed of 87.62km/h as the peloton followed in the tracks of Formula 1 racing cars at Spa-Francorchamps.

Stage 4 – Mark Cavendish (DDD) sprinted at 54.5km/h when a high-speed contact with Peter Sagan (BOH) took him down, leading to his exit from the Tour.

Stage 5 – Fabio Aru (AST) accelerated up to 22km/h on 10% gradient when he made his key attack to win atop La-Planche-des-Belles-Filles, the first summit finish of the 2017 Tour.

Stage 6 – At 75.04km/h, 400m from the line, Arnaud Démare (FDJ) reached a higher speed than Marcel Kittel (QST) in the final sprint, but couldn’t find a way through his rivals and had to settle for second place.

Stage 7 – After 213.5km, only 6 millimetres made the difference between a stage win for Marcel Kittel (QST) and second place for Edvald Boasson Hagen (DDD). It was one of the closest finishes in Tour history.

Stage 8 – At an average speed of 41.59km/h on an extremely demanding route, French rookie Lilian Calmejane (DEN) dominated the stage that also saw some of the most intense battles on the Tour so far.

Stage 9 – In the most demanding stage this year, a death-defying downhill was a game changer. Richie Porte (BMC) crashed out at a scary 72.5 km/h and had to be taken to hospital for his injuries.