Mohed Altrad, the founder and CEO of Montpellier-based Altrad Group, was last night named EY World Entrepreneur Of The Year 2015 at an awards ceremony held in Monaco’s Salle des Etoiles. Mohed was picked from among the 65 country winners from 53 countries vying for the title. 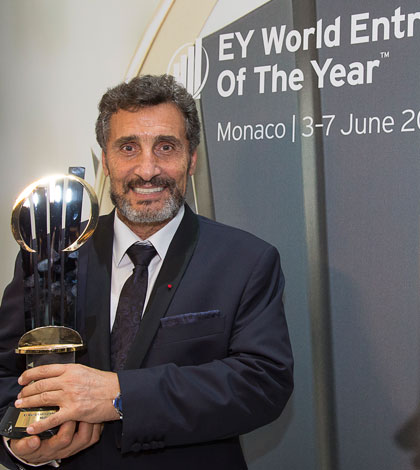 Mohed Altrad, the founder and CEO of Montpellier-based Altrad Group, was last night named EY World Entrepreneur Of The Year 2015 at an awards ceremony held in Monaco’s Salle des Etoiles. Mohed was picked from among the 65 country winners from 53 countries vying for the title.

Mohed Altrad, who was born into a Bedouin tribe in Syria, moved to France aged 17 and went on to gain a PhD in Computer Sciences. He and a partner bought a nearly bankrupt scaffolding maker in 1985 to form the basis of what is now Altrad Group. Mohed developed the company through acquisitions and organic growth and in 2014 generated nearly US$1b in sales and employed nearly 7,000 people in 110 subsidiaries throughout the world. The company, which is the world leader in cement mixers and a European leader in scaffolding and wheelbarrows, will reach US$1.13b in revenues by 2016. Mohed is also President of Montpellier Hérault Rugby Club.

Rebecca MacDonald, founder and Executive Chair of Just Energy Group, Chair of the World Entrepreneur Of The Year judging panel says:“This year it was a tough but ultimately unanimous decision. Mohed has built a hugely successful, fast-growing international business having overcome a humble and very challenging upbringing. He was forbidden from going to school as a child, moved to France to set up a new life and is now one of the country’s most successful entrepreneurs. The judges were impressed by his ability to build and sustain growth over 30 years and by his humility and character.”

Mohed Altrad, says: “I’m so honored to receive this prestigious award, especially as there was strong competition from such outstanding entrepreneurs around the world. I want to dedicate this award to everyone, as the objective of life is to help humanity. My story should tell anyone that you can change your destiny.”

Maria Pinelli, EY’s Global Vice Chair – Strategic Growth Markets, says: “Mohed is an inspirational entrepreneur who demonstrates that determination and perseverance can overcome adversity. He has grown his businesses consistently over a long period of time and is now a beacon for other entrepreneurs in France and beyond to follow.”

Mark Weinberger, Global Chairman & CEO of EY, concludes: “Entrepreneurs are a crucial engine of economic recovery and job growth. Mohed is a truly inspiring World Entrepreneur Of The Year winner. He demonstrates the tenacity and sense of purpose that so many of our 64 other country winners possess and which helps them build a better working world.”

About Mohed Altrad and Altrad Group

Mohed Altrad was born in the Syrian desert into a Bedouin tribe. His mother died shortly after his birth, and he was raised by his grandmother who forbade him from going to school. Mohed went nonetheless. He spied on what was going on in the classroom through a hole in the wall, until a teacher allowed him to sit in on lessons. Later, as he became the best in his class, he went to study in Raqqa, Syria. From there, he earned a scholarship in France and went on to obtain a PhD in Computer Science. He worked for large companies for about 15 years, but at heart he had always been an entrepreneur.

After starting and selling a business that manufactured portable computers, Mohed came across a nearly bankrupt scaffolding business while on holiday in the south of France. In 1985, without any knowledge of the industry, he and a partner purchased the company, which became the basis of Altrad Group. Mohed continued to grow the business by acquiring distressed companies and consolidating across Europe.

Mohed places the individual at the center of his company and offers young people apprenticeships or qualification scholarships. In addition, Mohed supports Doctors Without Borders, and the French League Against Cancer. He received the Knight of the French Legion of Honor, and was promoted to Officer in 2014.

Mohed is also an acclaimed author. His partly autobiographical novel, Badawi, is now taught in French schools as part of the literature curriculum.

About the judging panel

The independent judging panel comprised a distinguished group of entrepreneurs. The judging panel was chaired by Rebecca MacDonald of Just Energy Group (Canada). Joining her were:

Broadcast coverage, an interview with the winner and high-resolution photography will be available to download for broadcast and online use at: https://broadcast.ey.com/stories/9205

Event photography is available at www.ey.com/weoy/eventphotos