Feel the vibes of the digital leaders summit CIO CITY’16

With well over 300 people attending CIO CITY, it becomes evident that this event is a major milestone on every digital leader’s agenda. 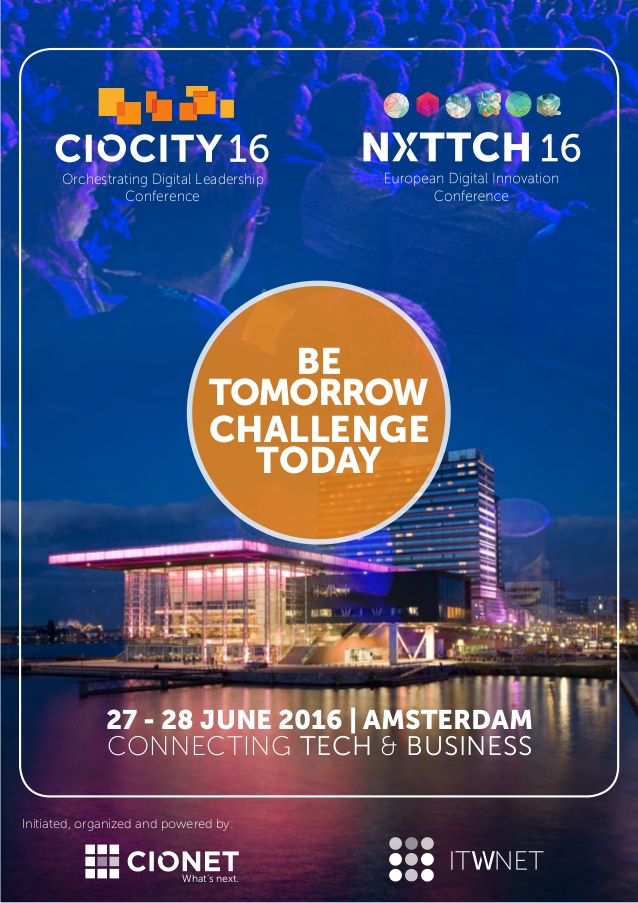 The keynote speakers however were not only orchestrating, but also giving an immense diversity in words of wisdom (and Brexit jokes). From leadership, software and digital transformation to blockchain and the future of tech: it was truly a varied programme.

Leading in a digital age

Serial entrepreneur Harley Lovegrove’s words on leadership in a digital age provided the audience more information and inspiration they could handle for his time on stage.

According to Lovegrove leadership in a digital age doesn’t necessarily have to do with ’digital’: “I’m getting less comfortable with the phrase ’digital age’, and I have a problem with the ’C’ in CIO or CDO. In these times the concept of ’chief’ is the most difficult.”

For him, being a great CIO therefore means being a great leader first. “You got to have vision, and you want to make a difference. You must dare to go for it, and crash through walls. You must bring in the best brains and lead by example. But most of all: If you want to change anything, having fun is extremely important.”

Joost Visser however thinks in products. The head of research at Software Improvement Group really wanted CIO’s in the audience to choose product over process. Software is key to your business success, he argues. “Hardware is just a commodity. But software is a differentiator, it’s in the DNA of our society!” But beware: at some point the market makes something cheaper. “So don’t forget to design for replaceability.”

Next there was a real ’power panel’ on stage discussing digital transformation and what it really meant. Federico Flórez Gutiérrez (CIO Ferrovial), Mattias Ulbrich (CIO Audi AG), Kurt De Ruwe (CIO Philips Lighting) and Paolo Cinelli (CIO IKEA) all had a say in this topic.

On one thing they all agreed: and that’s Two speed IT isn’t about two speeds. Ulbrich said there’s no difference in speed. Flórez Gutiérrez agreed, and added that you do have to work in different ways. Cinelli thinks that it cannot just be two speeds, but multiple speeds. “Just think of a car with just two speeds!” De Ruwe might have said it the best: “Two speed? It should be about the right speed!”

After Mari-Klara Stein, PhD (on how to profit from resistance on the workfloor) and Anne Sherer (on the value of self-service and the long term effects in tech) presented their research papers, it was time to have a sneak peek into the future.

A development every CIO needs to track of course is blockchain. Sander van Loonsbroek, Blockchain Solution Manager at Cegeka, told us exactly how this technology will shape future businesses. He could spend a whole afternoon explaining how it works, but he rather said how to embrace it.

Blockchain undeniably has an impact on your business, and it apparently will disrupt everything, from banks to elections, he said. But: “We’re suspicious to blockchain, because trust is decentralized. If we want to benefit from it, we have to take a step towards it.”

For instance: the self-driving car from Google. We’re not ready to trust it yet, while it actually does a better job than us. “So in the end, it’s a game of trust. The technology is only beneficial to all industries if we trust it.”

Futurist Gerd Leonhard in his finishing keynote gave a more general overview of future tech and how it affects business. Like Lovegrove, he gave us more thoughts than we might possibly handle. Here’s a little wrap-up:

Leonhard found 10 megashifts  that probably will happen in the next 7 years. Traditional industries, like automotive, will be totally reshaped by these shifts.

For CXOs, this means there are three key challenge opportunities when looking at the megashifts: they must see the exponential growth and potential of them, always keep in mind how they combine but also their interdependency.

For instance: self-driving cars will impact how we think about work, urban planning and ownership. Mark Fields, CEO Ford, already once said he’s changing the business model to look at vehicle miles traveled instead of vehicles sold, “because the actual mileage on those vehicles will accumulate a lot more then a personally owned vehicle.”

Real digital transformation therefore isn’t about using social media as a marketing tool – that’s just a bandaid. “It’s about getting 50 percent of your revenue from new services in the next five years.”

In the end, a great question from the audience emerged. How does the future of work looks like, if white collar jobs are replaced by robots? Leonhard gave us a soothing answer: “I think we’ll move up the food chain in jobs. We’ll invent jobs on top of technology and do stuff only humans can do so well:  we will do more work in negotiation, creativity and design.”